Alchemist’s Lab is a classic 3-reel slots game from developers Playtech, and when we say classic we really are not joking. 3 reels, 6 symbols plus a bonus game symbol, 1 pay line. It really doesn’t get simpler than this slots game.

Heavily influenced by the original Liberty Bell and fruit machine slots, Alchemist’s Lab updates the classic slots with vibrant colours and a bonus game. Set in an alchemist’s lab you are faced with vials of colourful potions and a spell book that shows you exactly what the winning symbols will get you.

A nice side game is the ‘creating gold’ bonus game. If you match three books you launch a bonus game where you get to pick three of ten potions to mix together to create gold. The bigger the coin produced the more you win.

The slots game itself is simple. Line up three symbols on the single payline to win. Line up three books and you trigger a bonus game. There are no multipliers or free spins.

The symbols reflect the Alchemist’s Lab theme with gold coins, vials of red, green and blue potions, gold rings and spell books. Your win meter and current bet are shown in two big colourful potions beakers to the side and the pay table is prominent at the top of the screen above the reels.

The gold coin is a scatter that awards a win each time it appears on the payline. The more gold coins you line up the bigger the win.

The ‘creating gold’ bonus game is quite fun. If you match three books you launch a bonus game where you get to pick three of ten potions to mix together to create gold. The bigger the coin produced the more you win.

Playing is quick and easy: clicking on Bet 1, Bet 2 or Bet Max will set the reels spinning. 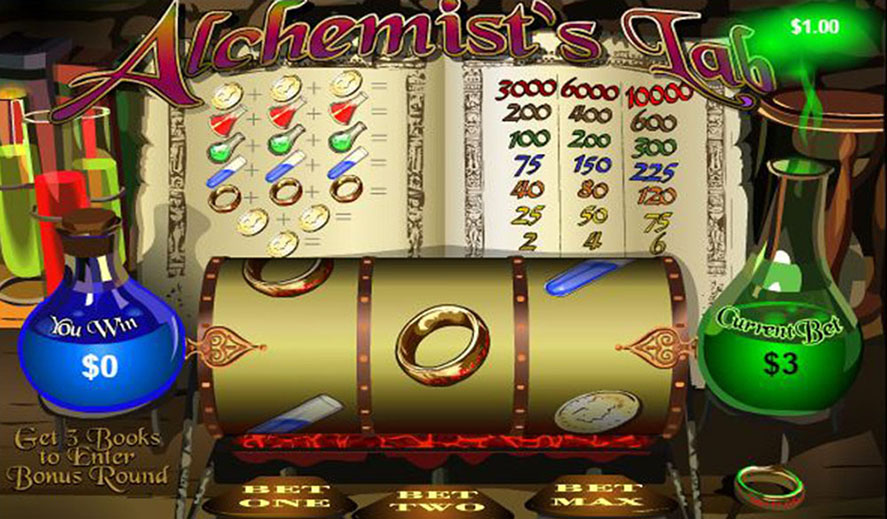 There is no mobile version of Alchemist Lab available.

Alchemist’s Lab is a fun game but will not appeal to players who like the more sophisticated online slots game. There are online slots games with a better RTP that offer a better playing experience – but sometimes you just need a simple, quick to play, fun game to play.

Playtech did make a very good move when they added the bonus game to this classic slots style game. It pushes Alchemist’s Lab from ‘meh’ to something that we actually ended up playing for quite a while. Be warned though, for a game with a relatively high RTP hitting those three spell books does not happen very often

Fun, cute, great colourful graphics. Worth a spin for fun.