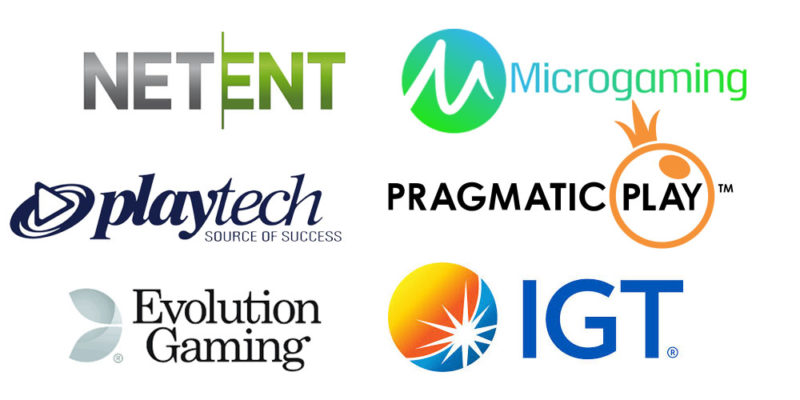 South African online casinos often feature titles from an array of online game providers. While others are tied to one specific game provider, others offer a wide range to players.

Here are some of the top casino game providers to be looking out for on casino sites.

We simply have to start with NetEnt, which is for sure one of the world’s top game developers.

The Swedish studio, which was founded in 1996, is the company behind popular online slot games such as the global hit Starburst, Blood Suckers, Lost Relics and Gonzo’s Quest. NetEnt has released more than 250 online slot games to date and the company has a strong focus on progressive titles, with Mega Fortune and Hall of Gods both very successful.

New slots are regularly put out by NetEnt, with one of its latest games being an updated version of its popular game Divine Fortune with the addition of the Megaways mechanic, which follows in the footsteps of the company’s similar release of Twin Spin Megaways earlier in 2020.

Up next we have Microgaming, which is one of NetEnt’s top rivals for the title of the biggest casino game provider in the world.

Microgaming claims to have created the first true online casino software in the world, which it released in 1994, and it remains just as relevant as a huge name in the field to this day. Among the famous online slots to have been released by the casino game provider is Mega Moolah, a progressive game that is responsible for some of the biggest slots payouts ever.

In 2015, a British soldier named Jon Heywood won £13,209,300 – which at the time was equivalent to €17,879,645 – playing Mega Moolah, which set a new Guinness world record. Microgaming continues to push the envelope with regard to using new technology. It has gone big on virtual reality by creating VR-friendly games such as roulette for online casinos to use.

Players at South African online casinos are sure to be familiar with games from Playtech, which has created hundreds of different titles since the company was founded in 1999.

Playtech does not just focus on slots, with the developer creating all types of games that feature on online casinos, including live casino games. This has been a real area of focus for Playtech in recent years, with its live casino releases including a game based on Deal or No Deal. In terms of slots, the Age of the Gods series has been one of the big success stories for Playtech over the years. Various superhero-themed slots have also been created by the firm.

Without a doubt one of the best casino game providers around, Pragmatic Play is a giant of the industry having released products across slots, live casino, bingo and many other areas.

Like other slot studios, Pragmatic Play is constantly working on new titles for online casinos. John Hunter and the Mayan Gods, the latest in its popular series, is one of the top 2020 games from Pragmatic Play. Peaky Blinders, a slot game that is based on the TV show, is one of the most played titles to have come out from the Pragmatic Play stable of late.

Live casino games are a hot trend within the industry, with Evolution Gaming among the companies looking to take advantage.

Evolution Gaming has created live games for a variety of casino classics, from craps and roulette to poker, baccarat and blackjack. The company has shown it is not afraid to think outside the box, though, also coming up with live casino games based on Monopoly and football.

Among the top Evolution Gaming options that are increasingly available to play at online casinos is Crazy Time, which has been built around the firm’s Dream Catcher money wheel game.

No list of the top casino game providers in the world would be complete without IGT.

The company, International Game Technology in full, employs thousands of people around the world and records billions of dollars in revenues each year. IGT is well known for making online slots based on popular movies and TV shows, with Jeopardy!, Sherlock Holmes, Transformers and CSI all getting the treatment from IGT. With about 300 slot games to pick from in the IGT library, there is a large amount of choice.

About the Author: David Drake

Casino expert author. David is a key part of the team, with over a decade of experience in online casinos ensuring he is as strong an expert as it is possible to find anywhere on the internet. A poker fanatic who spends much of his spare time playing online poker, David also has a passion for online slots and loves checking out newly released games from developers. David has been on board at Casino247 for a decent amount of time now, so he is fully settled in and ready to help us to take our game on to the next level. A news hound, David is the person who regularly pens the updates found on the news section of our site, while he sniffs out the latest offers and promotions to bring them to you as well. David has forgotten more about South African online casinos than most of us will ever know!