Not to be confused with a similar-sounding slot game called Lucky Coin, the Lucky Coins slot game from GameArt has found an audience despite only being released at the end of 2019.

There is no doubt that the slot looks absolutely fantastic, but what is the gameplay like? Find out everything you need to know about the Lucky Coins slot game in our detailed review below.

There are 25 paylines in play across five reels on the Lucky Coins online slot, so there are plenty of ways to win for anyone selecting this title after logging into online casinos. GameArt has been inspired by Asia for this slot and this can be seen in a lot of the design choices, with a lot of red and gold in the colour scheme, as well as in how the slot plays.

There is a good range of betting options, so the slot works well for everyone from newcomers to online casinos who are working on a low budget to high rollers who want to gamble a lot.

GameArt has used an Oriental influence when coming up with the Lucky Coins winning symbols, which are quite similar to the other Asian-themed games that are out there.

Turtles and three-legged frogs are among the common symbols, as well as Fu dogs and lucky cats. But it is the wild and scatter symbols that players will hope pop up on the game’s reels. There are also lucky coins that appear on a regular basis – more on those later in this review.

A fearsome serpent water dragon is the wild symbol in the Lucky Coins online slot. The wild can act as a substitute for any of the other symbols, other than the lucky coins and the scatter.

The scatter symbol included by GameArt is koi fish, which have been designed in the shape of yin and yang. These can only appear on the first, third and fifth reels of the game. When there are three scatters from a single spin of the reels, the player will receive six free spins.

This might not sound like a lot compared to the other free spins bonuses included on various slot games at online casinos these days.

But in the free spins round, the middle three reels spin together as gigantic symbols. If a scatter lands here, there will be three more free spins.

And the good news is that there are no limits to the number of times the free spins can retrigger.

The main special feature to have been included in the Lucky Coins game is all about the lucky coins themselves.

These symbols can appear on any of the reels and getting six or more lucky coins on a single spin on Lucky Coins results in a respin feature.

Lucky coin symbols stay in place for the respins and in the event of all 15 spaces on the reels being filled with lucky coins by the end of the game, the player will land the top jackpot.

In addition, players get the opportunity to double their wins on the Lucky Coins online slot game up to five times. GameArt has included an all or nothing gamble feature where players have to pick red or black to stay in the game. 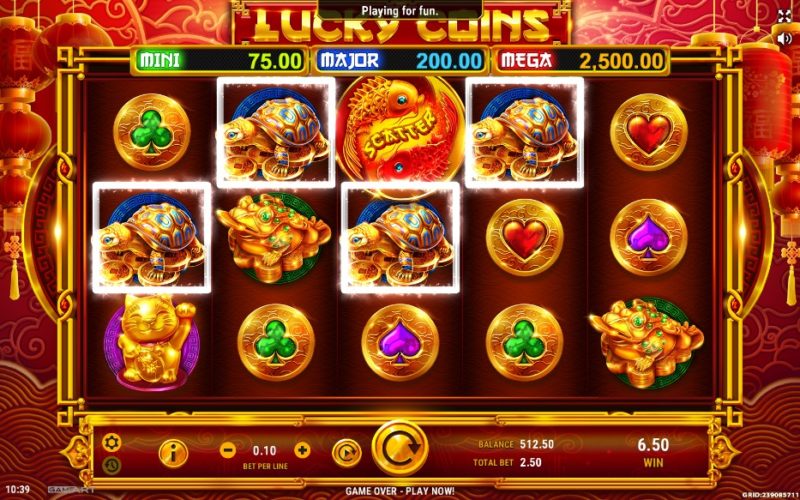 Asian and Oriental-themed slot games are very common at online casinos these days, but Lucky Coins still manages to stand out from the crowd. GameArt’s creation has a great look and design, while the raft of bonus features is sure to keep people coming back for more.

The top jackpot – up to 1,000x the amount staked by the player – that can be scooped is an appealing reason to return too, with the lucky coins symbols among those that can result in large wins for lucky players.

As with a lot of newer releases, Lucky Coins is also very mobile-friendly. Anyone who likes to play online casino games on a smartphone or tablet computer should therefore test it out.